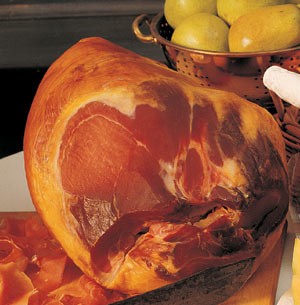 SKU:
$101.95
$101.95
Unavailable
per item
A traditional whole boneless prosciutto ham right from the cure house. Slice it thin for sandwiches, appetizers, or just as a snack. Put it on pizzas or in pasta dishes, but keep cooking time to minimum as this dry aged ham can toughen if over-cooked. 8lb average. Refrigerate upon arrival.

Johnston County Country Hams are the epitome of a very Southern tradition. Our hams are the result of a traditional curing process developed, perfected and handed down from generation to generation for hundreds of years dating back to the first American colonists.  While many understood the process and curing meats was a widely used practice, a few curemasters were able to fine tune their recipes, practices and techniques to a point of pure mastery.

Back in 1946 Richard Edmonson of Smithfield, North Carolina had the idea of producing quality country hams for retail sale at his commercial freezer locker business. His hams were popular locally but it wasn't until 1967 that the world learned of Johnston County Hams. In 1967 Edmonson discovered the real secret to Johnston County Hams' later success - legendary Curemaster Jesse Brown. Jesse's dedication for the perfect cure was uncompromising - he refined his curing process until he was able to consistently produce the finely aged yet delicate, not-too-salty flavor that made Johnston County Hams famous. His legacy lives on through his son Rufus Brown.
Featured in Esquire, Southern Living and many other publications, Jesse's country hams have become nothing short of legendary. They continue to place tops in ham competitions. Merle Ellis, famous butcher and syndicated columnist, acclaimed Johnston County Hams as "The Best Country Ham in the business." Men's Journal has proclaimed our hams among their "100 Best Things To Eat In America."